"If I knew I could pass at a time that was within my control, humanely, with compassion and kindness, there would be no fear. I would waste no more
life being afraid.
I could live."

We believe Ireland is now ready for open, compassionate conversations about end-of-life matters.

Ireland is changing and so too are attitudes around how we live and die. We believe a ‘good death’ is possible for everyone.

Voluntary Assisted Dying (VAD) may not be your choice, what we ask is that you support the right for people to choose for themselves. For all of us who support the choice to access VAD, now is the time to lobby your local TDs to ensure this Special Committee is created in a timely fashion.

Your help matters now. So what can you do?

Prompt action was to have been taken by TDs when the Dáil resumed last September (2021) to swiftly establish the Oireachtas Special Committee.  This was  recommended by the Justice Committee in July 2021 and it has still not been set up.

The Dying with Dignity Bill 2020 was submitted to the Dáil as a private members bill by Gino Kelly (TD) in October 2020. This Bill provided for the option of Voluntary Assisted Dying (VAD) at end of life for those suffering with terminal illnesses (only). The Bill received wide-spread public support however, the Justice Committee charged with assessing the Bill chose not to proceed with the Dying with Dignity Bill (2020).

The Committee will be comprised of up of 12 TD’s proportionately represented by each of the parties. Ireland is well placed to draft policy for legislation with robust safeguards, that would protect anyone who might seek VAD under the Bill. There is a wealth of international precedents (VAD has been available in Canada since 2016), and medical and legal expertise (including within our own committee and advisors) and extensive research has been carried out over the last 20+ years into best practice in those countries where VAD is already an option. This year alone New Zealand, five of the six Australian States and Spain have passed legislation to allow Voluntary Assisted Dying. Legislation is in process in Portugal, Scotland, England, the Channel Islands, and Italy, Finland and Austria are currently preparing legislation to present to their respective parliaments. Please let your Government representatives know of your concern at the delay in setting up the special committee

This is a time sensitive legislation for those with terminal illnesses that wish to access VAD. Everything is a time sensitive issue for those with terminal illnesses. This legislation must not be unnecessarily be delayed. We hope to see a timeframe of 6 months set for the work of drafting the new Bill once the Special Committee is established. As a single issue time bound committee, we believe such a timeframe is appropriate and respectful of those who already need to access this healthcare option.

We recognise that it can be difficult for healthcare professionals to publicly support providing Medical Assistance in Dying. Sadly, assisting someone to access Voluntary Assisted Dying (VAD) at the end of their life is punishable by up to 14 years imprisonment. We are campaigning to remove that criminal offense and permit doctors to provide a Voluntary Assisted Dying service in very restricted circumstances.

As such we have created a highly secure and highly confidential register of healthcare professionals in Ireland who support End of Life Choice. If you are a Healthcare Professional and you choose to sign this register, your personal data will be held on secure servers in a system founded and financed by the United Nations body UNOCHA. You can read more about how we store your personal data on secure servers in Ireland in a system facilitated by the United Nations here.

We will never share your personal data and we will never use your personal data for marketing purposes. We are gathering this data solely to count Healthcare Professionals in Ireland who support End of Life Choice. We will report on this data in aggregate, for statistical purposes, with the sole objective of campaigning to facilitate medical assistance in dying in Ireland. For more information please see our privacy policy. 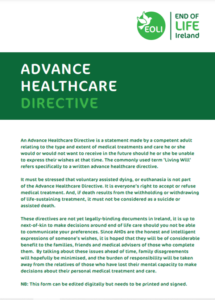 An Advance Healthcare Directive (AHD) is a statement made by a competent adult relating to the type and extent of medical treatments they wish to receive. It is a way of formally making known to others what your wishes are for end-of-life care. You can download a copy of an AHD here. It’s a seven-page document that you fill in to fit with your beliefs and wishes.

Sadly, assisting someone to access Voluntary Assisted Dying (VAD) at end their life is punishable by up to 14 years imprisonment. It follows that that no-one can ask for an assisted death because it might put someone in danger of prosecution. The Dying With Dignity Bill, if passed, will remove that criminal offence and permit doctors to provide a Voluntary Assisted Dying service in very restricted circumstances.

Please do read our series of blog posts outlining how to prepare for end of life, which includes directions on how to complete your Advance Healthcare Directive.